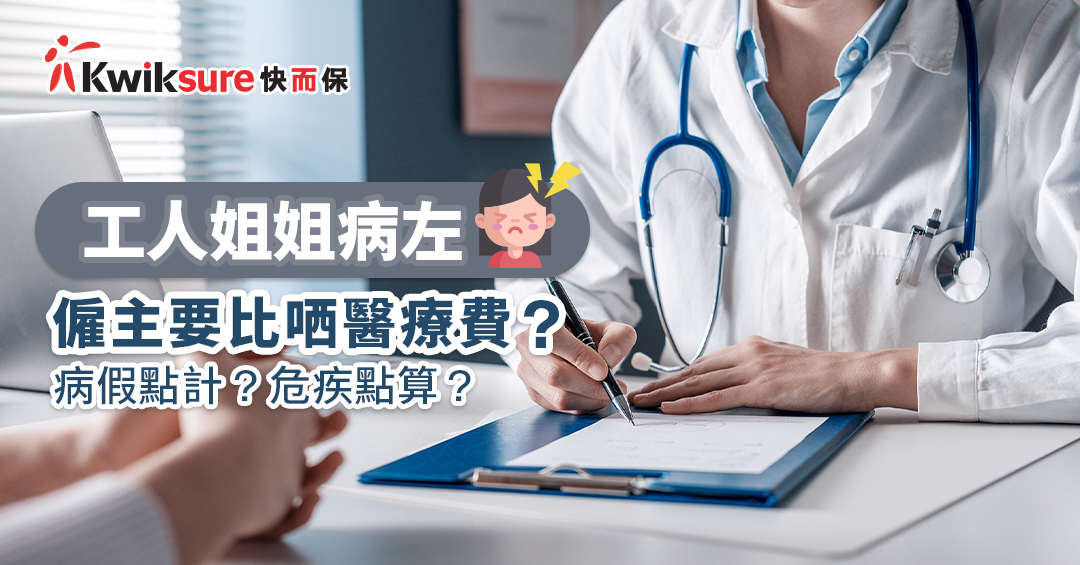 [ Domestic worker falls ill ] Is the employer responsible for the medical expenses? How to calculate sick leave? What if the helper is diagnosed with a critical illness?

The foreign maid helps with the household chores and cooks meals for the employer and his family everyday. But no matter how hard the domestic helper works, she can still fall ill every now and then. When she gets sick, what should you do as an employer? Who is responsible for the medical expenses? How is sick leave calculated? What if the helper is diagnosed with a critical illness? In this Kwiksure article, we will shed some light on what employers should pay attention to when the helper falls ill.

Does the employer have to pay the medical expenses of the foreign domestic helper (FDH)?

Under the terms of the "Standard Employment Contract'', if a domestic helper falls ill or is injured during the employment period (except when the helper is outside Hong Kong voluntarily or for personal reasons, such as when she is on vacation in her home country), regardless of whether the injury or illness is caused by her employment, the employer is required to provide medical care free of charge. That means, among other things, the employer has to pay the costs of consultations, hospitalization and handling dental emergencies.

On the other hand, FDHs have to agree to be treated by registered doctors provided by the employer. Accordingly, it is best for both parties to agree beforehand which doctor is to be consulted in case the helper falls ill or is injured.

But you may think: I have secured employees’ insurance for my domestic helper already, shouldn’t that be enough?

How do I calculate the paid sick leave of FDHs?

Should a helper go to a public or a private hospital when she is sick?

If your FDH has a Hong Kong identity card, she can enjoy public medical benefits just like local residents, meaning that a visit to the A&E costs $180 and hospitalization costs only $120 per day. With that said, for minor illnesses, we recommend going straight to a private clinic. After reimbursement from your domestic helper insurer, your out-of-pocket expenses will be below HKD $100, but you can save the time spent waiting in line to see a doctor. Naturally, where long-term treatment is needed, we still recommend seeking medical treatment in a public hospital.

Can a sick foreign domestic helper be dismissed?

Not unless the FDH is summarily dismissed for gross negligence. It is an offense for an employer to dismiss an FDH who is on paid sick leave, and an offending employer is liable to a fine of HKD $100,000 upon conviction. On top of that, the employer must pay 1) in lieu of notice, 2) compensation equal to 7 days' wages, and 3) sickness allowance to which the FDH is entitled.

In addition, FDHs have a right to seek compensation from their employers for unreasonable and unlawful dismissal under the "Employment Protection" section of the Employment Ordinance.

What should I do if my foreign domestic helper becomes seriously ill?

If, unfortunately, your helper is diagnosed with a critical illness, such as heart disease or cancer, the employer usually cannot afford the treatment costs in private hospitals. In that case, the only options available to the employer are to transfer the helper to a public hospital or arrange for her return to her country for treatment. This will significantly affect the quality of treatment she will receive.

What if my FDH is pregnant or has a miscarriage?

The law does not stipulate that employers should pay the expenses related to the pregnancy of foreign domestic helpers, such as examination fees or baby supplies.

In addition, if the foreign domestic worker deliberately concealed her pregnancy at the time of employment contract, the employer will not have to pay maternity leave wages.

My Indonesian/Filipino maid refuses to see doctors, what should I do?

Some Filipino and Indonesian FDHs like to take over-the-counter medicines, or simply opt for self-recovery, and seldom seek medical treatment on their own. This is because it is very expensive to seek treatment at a hospital in their home country.

The above information is for reference only. Kwiksure takes no responsibility for the accuracy and timeliness of the information. For the coverage, mode of compensation, benefit limit and premium levels of any specific insurance plan, please refer to the relevant policy terms.
Author: Anthony Chan
Created On: 2022-11-14
Edited On: 2022-11-14