Is It Dangerous to Have TV in the Car? 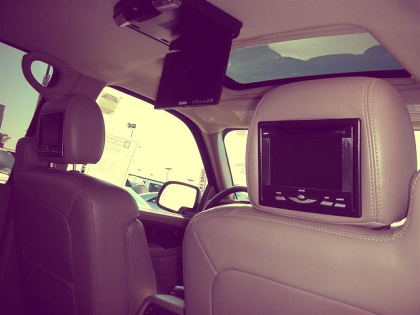 Any parents who’ve purchased a car or minivan in the last decade have likely had a conversation about whether or not to get a TV in the backseat.

Although having a TV in the car is not a new concept; auto televisions made their debut in 1997, but certain questions still arise today: Is it worth the price? Are they safe?

Here are some of the pros and cons of having a TV in your automobile.

The main draw of having a tv in your car is that it serves as a way to keep the passengers occupied. It isn’t just a matter of entertaining them, however: it’s also a matter of safety.

According to the AAA Foundation for Traffic Safety, the vast majority of traffic accidents are caused by distracted driving, and surprisingly, the main source of distraction is not your cellphone, but rather the passengers in your vehicle. This is especially the case with parents, as the younger the passenger, the greater the distraction. Kids and youth have been found to be four times as distracting as adults, and infants and toddlers are eight times as distracting.

Parents often take their eyes of the road for extended periods of time when attending to their children in the backseat. Parents will either have to break up fights between siblings, attend to a crying toddler, or clean up a spill — all while driving. By letting their parental instincts take over, adults are actually jeopardizing the safety of everyone in the vehicle.

With a TV in the car, however, children in the backseat can stay occupied, and parents won’t have to be turning around as often. Of course, don’t fiddle with the TV while driving.

Keeping safe is not just a matter of keeping your eyes on the road. Even just having a conversation with somebody else in the car is also considered a big distraction. For example, studies have found that hands-free mobile devices are not much safer than using a cellphone by hand, as engaging in a conversation is a major component of the distraction. The general part of the brain that governs language is also required for quick decision making while driving. By talking, you limit your brain’s ability to make decisions on the road.

Having a TV in the backseat will allow your kids to keep quiet and stop asking questions (including the infamous, “are we there yet?”) and you too won’t have to talk while driving. Not only will this keep everyone safer, but it will allow you to maintain a bit more sanity as well.

Not for the front seat!

Everything that was stated above applies specifically to having a TV in the backseat. A TV in the front would only serve as an even bigger distraction!

It’s currently illegal to have a tv in the front of a vehicle in almost every single country. However, even though car companies will not sell them, there are a number of people who have custom TVs installed after they purchase the car, either in the dashboard or even in the steering wheel, something which we do not recommend.

Some countries do allow front seat TVs as long as they point towards the passenger side. However, these TVs still serve as a distraction, as they are often still visible by the driver.

In Japan, it’s actually legal to have a TV specifically meant for the driver. Sold as ‘navigation devices’ with added TV functionality, many Japanese drivers state that the car ride is the only time in their busy schedules to catch up on TV. Some even look forward to traffic jams for this reason. However, although driver-side TVs are legal in Japan, many still choose to stay safe by foregoing this option.

Unfortunately, backseat TVs and entertainment systems aren’t cheap, usually costing five to ten times the amount of a regular TV. However, when looking at the price of an entertainment system, be aware that the cost usually includes a built-in DVD/Blu-ray player and several headphones as well.

If you want to subscribe to satellite TV programming for your car’s entertainment system, you’ll have to pay a monthly fee as well. Satellite is optional, however, and to avoid this cost, you can simply bring along a set of DVDs instead.

On the upside, if you have a backseat TV, your kids are less likely to surf YouTube videos on their smartphones for the entire car ride. Not only will this allow you to keep a better eye over what your kids are watching, you’ll also likely be saving on your children’s smartphone bills. Especially on long road trips, the data costs of streaming videos from a smartphone can add up quick.

Having a TV in the backseat of your car is a great way to keep the kids occupied during a car ride, allowing you to concentrate solely on the road ahead; however, issues of cost must also be considered.