Table of contents
Driving instructors need to secure third-party insurance specifically for driving lessonsWho is responsible for a car crash/traffic accident during a driving lesson or test?What if a crash occurs during a motorcycling test?4 tips for motorcycle insurance for learners 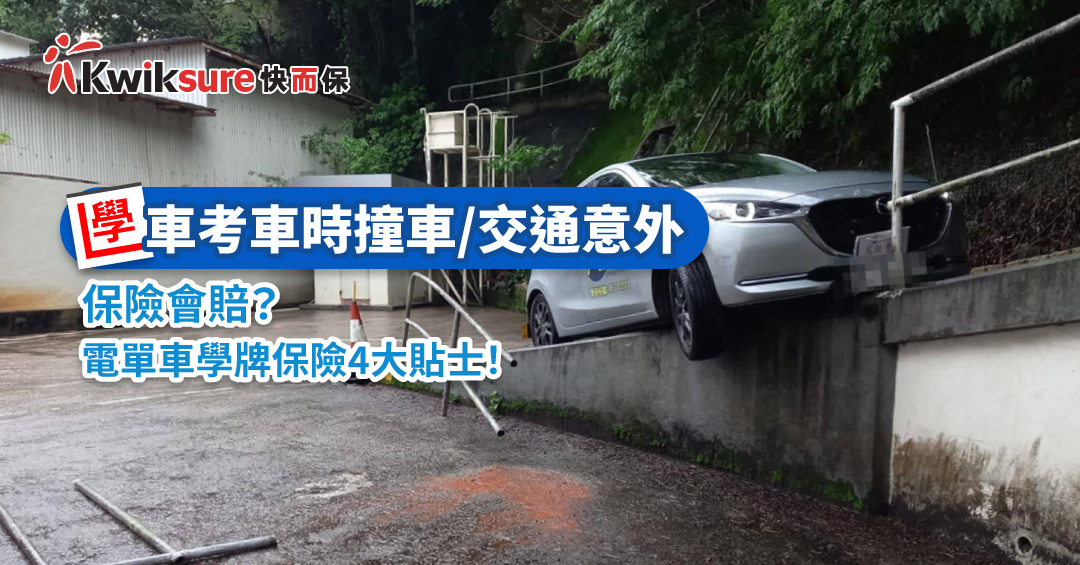 Will the insurer pay compensation after a crash during a driving lesson or test? Plus 4 insurance tips for learner motorcyclists

We often read about traffic accidents happening during a driving lesson or even a driving test on social media and the media, where the learner’s vehicle crashes into public objects like railings or even other vehicles. In situations like those, will the driving instructor or the driving school, or the learner driver, bear the greatest responsibility? Will the insurer compensate for a car crash during a driving lesson? Is there anything to be particularly careful about when securing insurance as a learner motorcyclist? In today’s article, the experts at Kwiksure will examine these issues in detail for you. 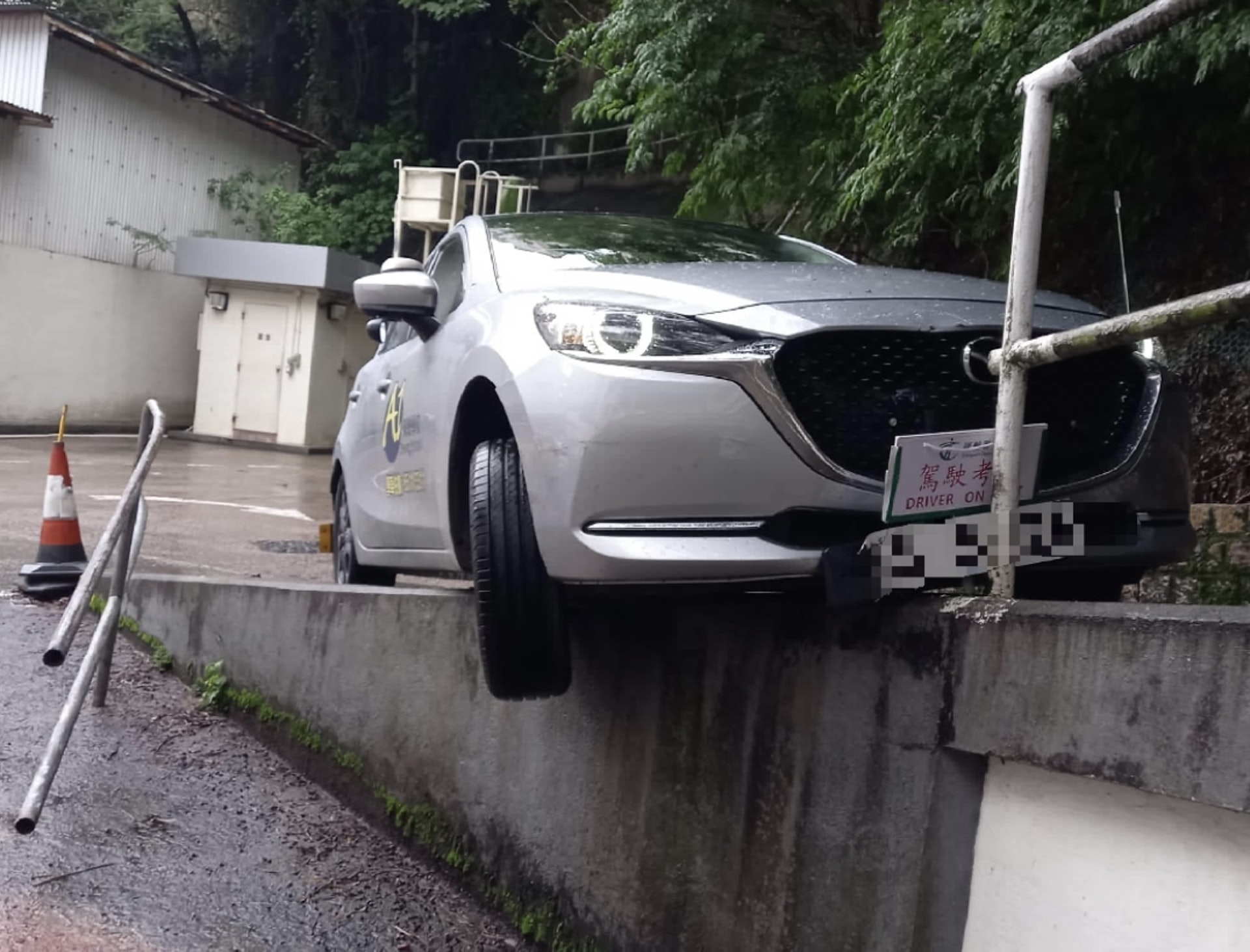 As the vehicle owner, a driving instructor is responsible and could also be charged, if a learner driver crashes the vehicle when learning to drive or taking a driving test.

Thus, driving instructors typically will purchase insurance specifically for their lessons, to provide coverage for accidents during a lesson or driving test. It will also cover third-party casualties and property losses. These commercial third-party car insurance policies, however, will only be effective when the instructor is teaching, not when they are driving on their own. Furthermore, the insurer has a right to refuse to compensate if the driving instructor fails to display the “Learner” plate on the car appropriately, or does not hold a valid driving instructor’s license.

In addition, the coverage of each insurance policy is different, and not all accidents will be covered. What’s covered and what’s not will depend on the terms of individual policies. 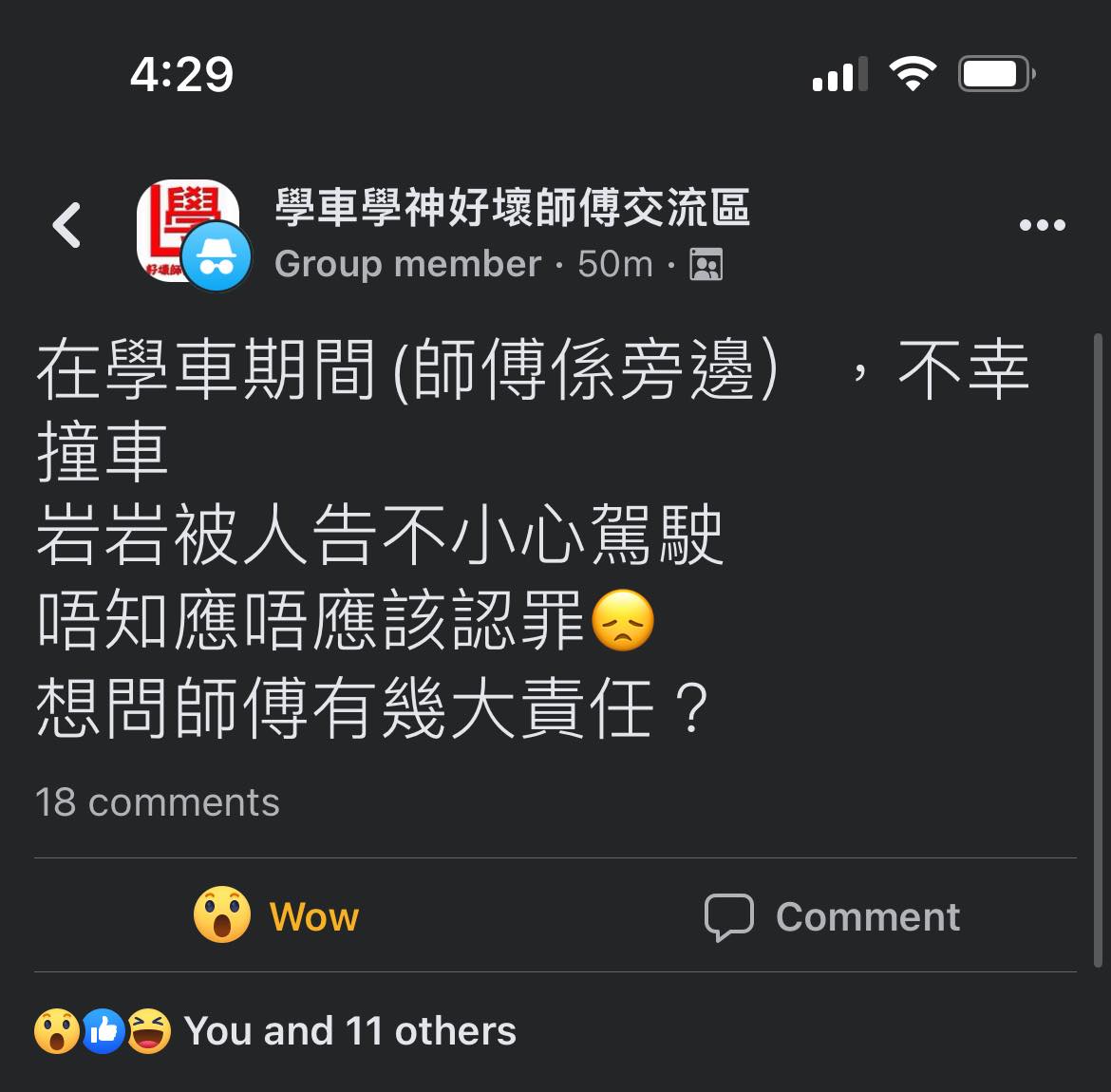 There is often news of accidents occuring in a driving test (source: online discussion forums)

Who is responsible for a car crash/traffic accident during a driving lesson or test?

Going back to the original question, the answer is that both the learner and the instructor are responsible. In the event of a traffic accident, the instructor, as a professional, may have to bear a greater responsibility. The instructor may be charged with careless driving and fined up to HKD $5,000, and get a jail sentence for up to six months, particularly if he was playing on the phone or dozing off during the lesson. Serious cases may even cause the driving instructor’s license to be revoked.

As for the learner driver, his learner’s license will be revoked, and he may be barred from applying for or holding a Probationary Driving License within a statutory timeframe. If you are unclear on this, before the official start of the lessons, you can consider asking your driving instructor how much the deductible is under the car policy and whether it will be “transferred” to the learner driver in a car accident. To protect yourself, and also to avoid astronomical compensation claims, you can also ask the instructor to produce a copy of the insurance policy, to ensure that the vehicle is properly insured for the lessons.

If you enroll in a driving school, you should sign a contract at the time of enrollment, stating the upper limit of the compensation you are responsible for paying in the event of an accident.

Last but certainly not least, the learner driver bears the responsibility of ensuring that his driving instructor has a valid driving instructor’s license, and is approved by the Transport Department to teach driving. Otherwise, should there be an accident, the student will be driving without a license. The learner driver cannot evade responsibility by declaring he is unaware of the problem.

What if a crash occurs during a motorcycling test?

The situation with motorcycles is different from that with private cars, because learner motorcyclists do not have an instructor by their side, so learners only need to secure insurance for learners, and already they can learn to ride a motorcycle on the road. Should an accident occur, the learners themselves will have to take full responsibility.

There are usually two ways to obtain insurance for learners: If the learner learns by renting a motorcycle from a driving school, the driving school will usually have already purchased insurance, and the school is both the policyholder and the vehicle owner. The school will have agreed with the insurer that anyone can ride the motorcycle as long as they have a learner’s license.

The second possibility is where the learner motorcyclist has just obtained his learner’s license, and directly buys the motorcycle he likes without going through the driving school. The learner then secures insurance for learners. In this scenario, the owner of the vehicle is the learner himself.

Naturally, having motorcycle insurance for learners will not make you invincible. You should pay attention to whether there are specific exclusions on the insurance policy, such as "the motorcycle shall not be used for learning purposes after a specified time of the day".

In addition, you are advised to also pay attention to the deductible of the insurance policy, because usually the higher the deductible, the lower the premium. Thus, when considering an insurance plan, do not just look at the price. If you are learning motorcycling at a driving school, you can check with the insurer about the compensation limit and deductible of the insurance plan, to assess whether there is sufficient third-party protection, and to understand the maximum amount of the compensation you can be liable for in the event of an accident.

4 tips for motorcycle insurance for learners

1. Learner’s no claims deductible (NCD) can be accummulated

Because a learner’s license is needed to learn motorcycling, and the epidemic has repeatedly delayed examinations, you will have to wait at least nine months to have a motorcycling test. On top of that, since motorcycling tests are typically harder to pass, candidates often have to take the test two to three times before they finally pass it. After waiting for a year, the existing insurance will need to be renewed. When renewing the insurance, the driver will still be eligible to renew as a learner motorcyclist, but he will be able to accumulate his NCD, which can be used for a P license or a normal license in the future.

The insurance coverage for learners will keep covering the motorcyclist as he becomes a P license holder from a learner, but no premium will be refunded. The driver is under no obligation to notify the insurer of his change of status.

Many motorcyclists will deliver food to earn extra money. If a driver with a P license or a full license does this, most insurance companies will be willing to cover it, and the difference in premiums is only about 50% on the premise that the motorcyclist reports to the insurer when securing motorcycle insurance. As for food delivery by learner motorcyclists, it is extremely hard to find insurance coverage, because the risks involved are simply too high.

The above information is for reference only. Kwiksure takes no responsibility for the accuracy and timeliness of the information. For the coverage, mode of compensation, benefit limit and premium levels of any specific insurance plan, please refer to the relevant policy terms.
Author: Anthony Chan
Created On: 2022-11-22
Edited On: 2022-11-22

Driving instructors need to secure third-party insurance specifically for driving lessonsWho is responsible for a car crash/traffic accident during a driving lesson or test?What if a crash occurs during a motorcycling test?4 tips for motorcycle insurance for learners