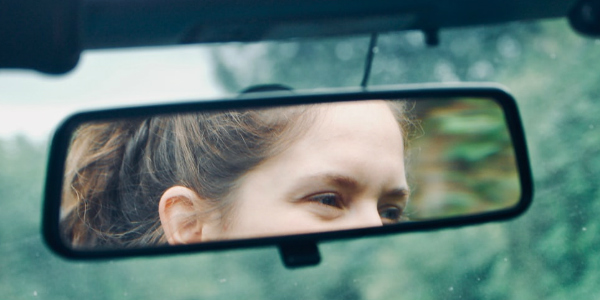 Most of us have driven at night only to be blinded by the glare of headlights shining from behind, making it impossible to see what else is at the back and impairing our vision as well. While you can manually adjust the mirror by flicking a switch, changing the mirror to the nighttime driving mode dims almost everything else and makes it difficult to see out of the mirror. That’s where electronic rearview mirrors come in.

In this Kwiksure article, we’ll go over electronic rearview mirrors, including the advantages and disadvantages of using them.

What is an electrochromic rearview mirror?

Electrochromism is a term used to describe when the color in a substance changes due to the application of an electric current. The change can be reversed as well. Upon sensing light from behind, an electrochromic rearview mirror, which is also known as an electronic or electric rearview mirror, dims automatically. This helps reduce glare that would otherwise be problematic for driving.

How does the rearview mirror dimming work?

The electronically-operated mirror uses a combination of light sensors and an electrochromic gel that changes color when it either gains or loses electrons due to an electric current. The gel sits between two pieces of glass, which has a clear coating that conducts electricity. Additionally, one piece of glass has a reflector.

The mirror system features a sensor that faces the front of the vehicle. Sensitive to low levels of light, the sensor signals the mirror to identify signs of glare. Similarly, the second sensor faces towards the rear of the vehicle and recognizes glare from cars coming from behind.

Upon detecting glare from behind, the second sensor sends current to the gel in the mirror. This creates a voltage that corresponds to the amount of glare detected, causing the mirror to quickly dim on its own. The mirror returns to its normal state when glare is no longer detected by the sensor. The electrochromic mirror system is capable of dimming both external and internal mirrors.

Electronic rearview mirrors improve driving safety by getting rid of glare that can affect vision. Glare from the headlights of trailing vehicles makes it harder to see what’s in front, making it especially dangerous when driving on dark roads with cross-traffic and areas where animals may cross the road.

As we previously mentioned, the mirrors dim automatically, reducing glare and discomfort. What’s more, they dim proportionately to the amount of light that reaches them, allowing the mirror to dim more when headlights are brighter or closer to your vehicle. The advantages of these mirrors include:

Any electronic object can malfunction, which may occur at inopportune moments, if at all. In addition, auto-dimming rearview mirrors are more difficult to repair than conventional rearview mirrors. Electronic rearview mirrors also take time to get used to, since you will probably attempt to manually adjust them at first out of habit.

When it comes to selecting an electronic rearview mirror, you’ll notice that there are different styles and brands available. Many electronic rearview mirrors also come with thermometers, compasses, and garage door openers. It’s best to choose a mirror from a trustworthy brand, such as Gentex or CIPA. As for the style, go for one that provides the view and added features that you’re after.

For example, the Gentex mirror comes in multiple styles to match your exact needs. You can choose one with a camera or one with a compass. Likewise, there are no blind spots and panoramic styles available as well.

How to install a rearview mirror

It’s easy to see why an electronic rearview mirror would be a good addition to your car. After all, your safety, as well as your passengers’ safety, comes first and making your car safer is worth the investment.

If you’re looking for motor insurance in Hong Kong, our experts at Kwiksure are happy to help you at any time. As Hong Kong’s leading car insurance broker, Kwiksure can help you find the best third party insurance and comprehensive insurance. Contact us or visit our website for a free, no-obligation quote today.