Distracted driving: using your phone behind the wheel in Hong Kong 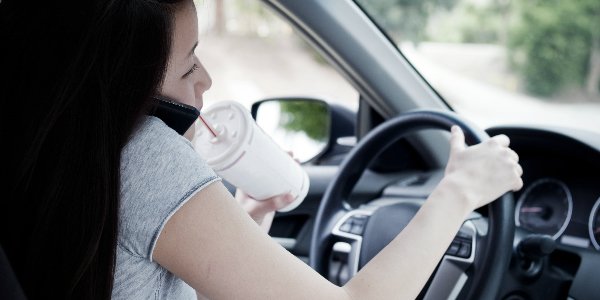 Roads can be dangerous places but, as a driver, nothing makes it more unsafe than distracted driving. There are lots of reasons for losing focus on things other than your driving; other passengers, alcohol and drugs, music. However, smartphones are by far the number one reason many drivers will take their eyes off of the road and pose a safety risk to other drivers and pedestrians.

This week, Kwiksure examines the laws around using mobile phones whilst driving on Hong Kong roads, as well as the impact being distracted might have on your insurance.

What do the Hong Kong road laws say?

There’s only truly one law that relates to the usage of mobile phones by drivers in Hong Kong. In order to reduce instances of distracted driving, Regulation 42(1)(g) of the Road Traffic (Traffic Control) Regulations (Cap.374G of the Laws of Hong Kong) state that a driver:

This law relates specifically to drivers “holding” a smartphone whilst using it to engage or talk during a call. This includes using the speaker-phone function of a mobile phone if a driver is required to hold the phone during call. The Regulation permits, however, drivers to use a hands-free device, such as a bluetooth headset, in order to take calls whilst driving. The penalty for contravening this Regulation is HKD 2,000.

What can be considered a gray area, however, is whether using your phone to check emails and messages, or browse web pages, is considered to be in breach of the Regulation. Our understanding is that it’s not specifically illegal to hold your phone when it’s not engaged in a call, however being distracted by your phone may still run foul of other Hong Kong road regulations.

Distracted driving as a result of careless driving

According to Section 38(2) of the Road Traffic Ordinance (Cap.374 of the Laws of Hong Kong), a person can be deemed to have driven carelessly:

The key considerations under this law is “without due care and attention” and “without reasonable consideration for other persons using the road”. The Community Legal Information Centre (CLIC) explains that Courts reach their conclusions on the law based on an objective assessment of whether or not the driver acts below the standard of a reasonable and prudent driver, not whether or not the act was deliberate or absent-minded.

For example, a driver that causes a collision or knocks down a pedestrian whilst be distracted by checking WhatsApp messages may not be charged under the mobile phone usage laws, but may be charged under the careless driving laws. In order for this to occur, the Court must be sure beyond a reasonable a doubt that the distracted driving was not of the standard expected of a driver whose focus is on the road they’re driving.

Distracted driving as a result of dangerous driving

Section 37(4) of the Road Traffic Ordinance (Cap.374 of the Laws of Hong Kong) states that a person is deemed to have driven dangerously if:

The definition of dangerous in the Ordinance means “danger either of injury to any person or of serious damage to property”. The Courts have guidelines in a later section of the Ordinance that outline considerations for things such as road conditions, traffic, and the circumstances surrounding the physical conditions of the accused. The competence test therefore requires the Courts to consider a driver’s actions from the perspective of a competent driver.

Examples of dangerous driving can include racing, jumping or running red lights deliberately, excessive speeding, and other situations such as driving an overloaded vehicle. To illustrate this point, a driver that crashes due to running a red light whilst checking their phone might be deemed to have driven dangerously based on the idea that a competent driver might have slowed or stopped before crossing an intersection, even with ringing phone distracting them.

Court attitudes to driving incidents where phone use is a factor

Cases involving traffic violations and collisions are all assessed on their own individual merits, however the CLIC again gives some insight into what the Hong Kong Courts’ attitudes are towards sentencing in dangerous cases. Honourable Mr. Justice Ma (now the Chief Justice of the Court of Final Appeal) outlined that incidents of dangerous driving will be generally obvious to the offender.

Citing the R v Cooksley (2003) case from the United Kingdom, Justice Ma expressly approved driving while unavoidable distracted, e.g. by reading or by use of a mobile telephone (especially if hand-held) as an aggravating factor the Courts may take into account when assessing and sentencing dangerous driving cases.

While the law itself does expressly outline a driver must be “holding” a phone to breach it, there is precedent that simply being distracted by a phone may be grounds for finding a driver in breach of Hong Kong’s road traffic laws.

Is distracted driving really that bad when it comes to mobile phones?

The Hong Kong Police Force’s Traffic Report for the first half of 2016, found that drivers were the cause of 84% of that period’s accidents with 57% of all accidents occurring at pedestrian crossings. Private car drivers were the largest group involved in accidents (32%), with taxis following next (18%). When accounting for the amount of certain types of vehicles (accident rate per 1,000 licensed vehicles), franchised public buses were the worst at 202 incidents.

The Transport Department's injury statistics point to “Other passenger/driver factors” as the biggest cause of death and injury among the data (other causes included drunk and drug driving). In fact, the Hong Kong Government was called upon to address the issue of distracted driving due to mobile phones in 2014 when an official cited taxi drivers as significant road risks due to having excessive numbers of mobile phones on their dashboards.

That same year saw car maker Volkswagen produce and promote an advertising campaign that saw Hong Kong cinema-goers become an example for mobile phone distraction. The theatre ran a first-person view of a driver speeding down a road until a behind-the-scenes worker used a program to send all of the audience a mobile phone message. As cameras catch them all glancing down towards their phone, the on-screen driver suddenly crashes.

Finally, insurance giant AXA conducted a survey in 2014 as well that found that 57% of people admitted sending text messages whilst driving. If this wasn’t alarming enough, 27% of drivers admitted to surfing the web or even watching TV dramas, leading to then-director of the taxi driver branch of the Motor Transport Workers General Union calling for transport authorities to issue heavier penalties for dangerous and distracted driving.

Will being found using my mobile during an incident void my insurance?

In the same article discussing the AXA survey, lawmaker Chan Kin-Por proposed that insurance companies could reclaim compensation from drivers if traffic accidents were found to have been caused by careless electronic device use. However, the reality is that drivers are seldom prosecuted by Hong Kong Police for using mobile phones whilst driving, unless they’re using them to make calls.

At this time insurers will still pay out for claims, even where their policyholder may have been the cause of the collision due to careless or dangerous driving. Hong Kong drivers should understand, however, that driving under the influence of either drugs or alcohol will see their coverage denied. Regardless of whether you have third-party or comprehensive car insurance, insurers will honor coverage in most distracted driving incidents.

When it comes to needing car insurance, your first choice should be the experienced team at Kwiksure. Our expert advisors have been serving Hong Kong drivers for almost 20 years, providing third-party and comprehensive insurance solutions to cover all types of incidents. While we highly recommend being a responsible driver and not using your phone while you drive, we’ve got coverage options available that will cover distracted drivers.

For more information or a free quote, contact our Kwiksure advisers today!