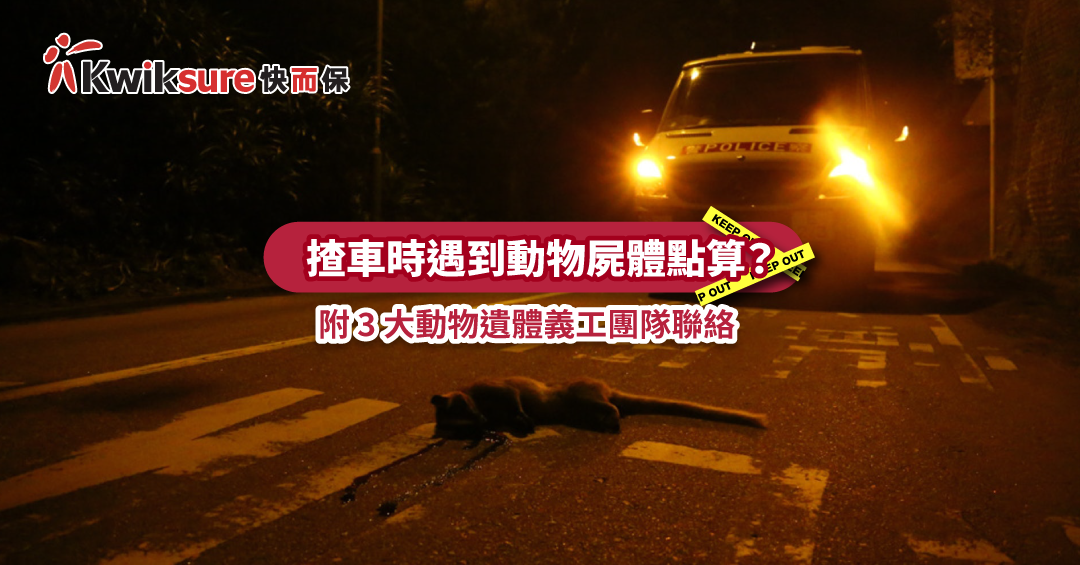 What should you do when you see animal remains while driving?

There is a general lack of awareness when it comes to animal protection in Hong Kong, and oftentimes, stray animals are killed by passing vehicles or poisoned. Which government agency should you contact if you come across animal remains while driving? Can the driver get out of the car and pick up the animal remains? If no one comes to collect it, what will happen to the dead animal? Kwiksure will answer the above questions for you today.

If you see animal remains on the road, what should you do?

Besides the FEHD, there are also some local volunteer groups that you can contact. They will cremate the remains of stray animals so that they can leave this world with dignity. These volunteers will do it step by step, from inspecting the microchip and cleaning/wrapping the body to finally having it cremated.

If you see animal remains on the road while driving and decide to pick it up, remember to pay attention to traffic safety. For example, if you are on a highway, you should not stop your car to collect animal remains.

The Stray Volunteer Group (“the strays”)

The strays are a group of volunteers who love animals and share the same beliefs. They mainly take care of stray cats and dogs that died on the road in an accident, so that they will not end up in landfills. The group is entirely self-funded and does not accept any donations, but they accept donations of materials (such as large towels, lotus flowers, dried flowers, medical gloves, scriptures, food, disinfection supplies, and transparent plastic bags, etc.,) for use during the handling of remains or cremation.

If you see animal remains on the road, you may call:

“Mun Gor” is a delivery driver and the initiator of the Furry Kids Concern Group (dogs and cats are commonly called “furry kids” in Hong Kong). After receiving a call for help in his spare time, he will drive his truck to pick up the animal remains, put them in a freezer in the car, and deliver them to a company dedicated to handling animal remains for cremation and scattering of the cremated ashes.

At the same time, Mun Gor has also set up a "support fund for furry kids needing help" to assist with the medical and living expenses of dogs and cats, as well as other miscellaneous expenses (such as for handling their remains when they are gone). Support from people with the same beliefs is welcome.

If you see the remains of a dog or a cat on the road, you may call Mun Gor at:

The association was established in 2005. Its "NPV KK Cremation Fund" aims to provide free cremation for stray cats and dogs that have passed away, including animals that died in NPV clinics or on the streets. If you find a deceased cat or dog on the road, you can send a photo of the body, the name and phone number of the contact person, and the location (if it is in a deserted place, you can provide the number of a nearby lamp post or accessory store, and take pictures of the location) to 6219 1465 via WhatsApp.

If your application is approved, please try to stay by the deceased animal if possible. NPV will arrange for a designated company, which will usually arrive to collect the body within one hour and then arrange to have it cremated. If you cannot possibly stay there, it is recommended that you cover the animal remains with a suitable item, and make a note on it telling that a dedicated company has already been contacted.

If you see a dog or cat body on the road, you may send a WhatsApp message to:

It is illegal to improperly dispose of animal remains

Under the laws of Hong Kong, the disposal of carcasses is regulated by section 10 of the Public Cleansing and Prevention of Nuisances Regulation (Cap. 132BK). No person shall, without lawful authority or reasonable excuse, such as the consent of a public officer, place or cause to be placed any dead body or carcass in any street or public place, in the common area of any building, in any watercourse, stream, channels, ditches, reservoirs, or the waters of Hong Kong; or in any government property. Offenders can be fined up to HKD $25,000 and imprisoned for up to 6 months.

The above information is for reference only. Kwiksure takes no responsibility for the accuracy and timeliness of the information. For the coverage, mode of compensation, benefit limit and premium levels of any specific insurance plan, please refer to the relevant policy terms.
Author: Kwiksure Team
Created On: 2022-12-05
Edited On: 2022-12-05